Monday night, at 7:55pm, while my kids were walking in and out of the family room pretending to brush their teeth, they begged to watch a little bit of the Grammy’s before bed. I agreed with trepidation, knowing that some of the performances can be a game of appropriateness roulette. Well, before I could even make up my mind, right out of the gate, there was Beyonce’. Wet, half-naked Beyonce’ in her fetishized leather-strap, thong bodysuit from the 50 Shades of Grey collection.

She opened with what is commonly known in the Gentlemen’s Club circuit (or for Jennifer Beals fans) as a “Chair Dance”.

She had it all… writhing, spread eagle on the old-timey chair,  crawling sexily down to the floor, back up to her knees, all while seductively singing lyrics about domestic abuse and violence towards women. And, if that weren’t profane enough, she also dropped some expletives that needed to be bleeped out.

Those first 10 seconds felt like an eternity. Stunned… I started blinking and sweating, looking quickly at the kids and then to my husband who met my darting glances with his shrugged “what do we do?!?” shoulders and own deer-in-the-headlights gaze.

I could have easily coughed loudly and changed the channel; however there was no denying that we ALL saw it and I felt this was a real media literacy moment where we could discuss what was going on. Our conversation started with the deep, philosophical question we have pondered one too many times before…“Where are Beyonce’s pants?”. It made me wonder if someone had already snagged the parody Twitter handle @BeyoncesMissingPants… like @AngiesRightLeg or @PharrellsHat.

As both kids had their noses scrunched up in that little kid “this is weird and gross” expression, we talked about how they felt and what they saw. We all agreed that it was not content one would expect on ABC at 8:00. And then, as quickly as it happened, the TV was off and they were over it. They shuffled off to bed talking about Minecraft and other much more important things.

I thought more about it, because I wasn’t over it. Beyond the gratuitous self-objectification and sexualization, which my colleagues and I have blogged about before, the performance itself was theatrically lame. It was the same stale, predictable, tired, old regurgitation of the video-vixen formula. Sweaty, half-naked woman slinking around and touching herself for her fully clothed man.  Subjugation of female power for the desperate approval of the male gaze. Yawn. But wait! She did go the extra mile with the strobe lights and fog machine. Zzzzzzzzzzzzzzzz.

It begged the question; why is Beyonce touted as “empowered” and a “trailblazer” when just six short months earlier we were throwing rotten tomatoes at Miley Cyrus for essentially doing the same thing?  I know there were distinct differences between Miley’s VMA performance and Beyonce’s Grammy grind, but if you ask me, they were a hell of a lot more alike than they were different. The only thing missing was the foam finger. Oh, and the marriage vows. 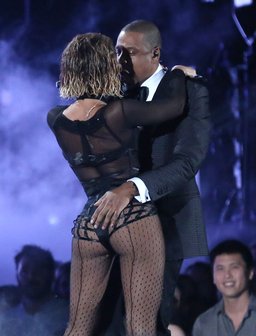 Anyway, I awoke both yesterday and today expecting my Facebook feed to be awash with criticisms of Beyonce’s performance. There were three levels of outrage I thought I would be met with:

But I got crickets…

I kept searching, thinking SOMEONE out there saw what I saw. Yes, there were definitely some indignant Tweets by parents, but most media outlets seemed to LOVE it!

Mashable called it a “flawless performance”.

US Magazine called it “a super-sexy and intimate performance”. (Call me a stickler for vocab and couples-counseling lingo, but shaking your money-maker for your hubby in front of 28.5 million viewers is anything but “intimate”).

Forbes called it “synergy on display” and talked about the genius of the couples’ branding.

The Daily Beast touted that Beyonce “gave the best Grammy performance” that was “ the sexiest thing that had ever been on television”.

The New York Daily News said she “got the party started with a spectacular performance”.

Yes, the same media outlets that tore Miley Cyrus limb from limb, giving us these journalistic nuggets about her “twerking” :

Interesting and strange double standard, no? One gets a hefty stamp of approval and the other gets ridiculed and slut-shamed.  Many fascinating debates about Beyonce’ as a “modern-day feminist” are just a click away, but why does she get a sweeping pass where other stars are called out for their duplicity?

I was confounded that everyone was eating this performance up with a spoon and lauding it as something empowered and inspired. Most of all, I was bothered that someone who has considerable talent chose the path of least resistance, one of the lowest common denominator.

When we applaud this tedious, repackaged drivel over and over as entertainment (or even worse, as appropriation of female empowerment) we are going to get what we deserve… more of the same. Let’s not get desensitized to what we are being fed by the media. Let’s not mindlessly accept their terms and definitions of what is SEXY.

Bey, when girls truly Run the World, they’ll do much better than this. Many would say that the most empowering thing you can do to subvert the oppression of over-sexualized, patriarchal media is to encourage, validate and “take back” women’s sexuality. I, for one vehemently agree with this stance and look for examples of it, daily.  The problem is, all too often, I find myself having to make excuses, cock my head and squint to find them.

This entry was posted in Uncategorized. Bookmark the permalink.